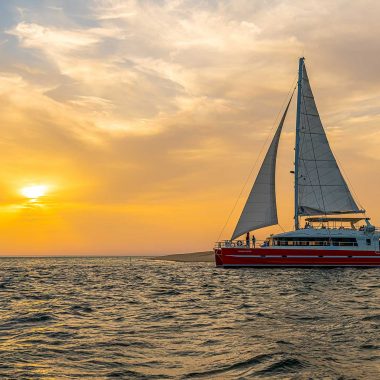 25 metres long and 9 metres wide, Le Côte d’Argent was specially designed to navigate Arcachon Bay. Fitted with new-standard anti-pollution engines, it can navigate by sail in addition to its main motorisation weather permitting. The result is a very low environmental impact for its size and passenger capacity. Le Côte d’Argent is the biggest hybrid catamaran in France.
Feel like taking a ride on the Bay or enjoying an exceptional evening?

Le Côte d’Argent proposes many different cruises in the heart of Arcachon Bay. From L’Ile aux Oiseaux to the tip of the Cap Ferret peninsula, passing by le Banc d’Arguin sandbar, sail through the sea spray, breathe the sea air and admire exceptional views.
Very versatile, Le Côte d’Argent was designed with all your events in mind: incentives, weddings, festive evenings. A beautiful and luminous reception room fitted with picture windows accommodates up to 150 guests for cocktails and 80 guests for gourmet meals, for work or … afterwork. Upon arrival at the pier, an outdoor bar welcomes you and your guests for oyster tasting, served with local white wine. Access to the 70m² upper deck offers a unique, 360° view. The catamaran can also be set up for seminars with all the necessary equipment on board.

The South West enjoys a veritable reception room, unique and original, less than 45 minutes from Bordeaux.

A PROJECT, AN INNOVATION

The idea of a running large-capacity boat was on the mind of several Bateliers who were mindful of developing the business. Especially as the emblematic, grand day-cruiser l’Atlantic Princess, left a void after its final voyage from the Bay.

After a long interim, under the leadership of Pierre-François Delpy, a group of Bateliers went to work on a project that materialised as guidelines taking into account the uniqueness of Arcachon Bay and also adapting to new forms of tourism. A veritable challenge, as they had to find the type of boat capable of transporting over 200 passengers, respecting the specificities of the Bay, with a means of propulsion respectful of the environment and all the while meeting the demands of comfort and aesthetics.

Having searched the local shipyards, a national enquiry finally found the “rare pearl”. The very reputable shipyard De Rovère in Saint-Mandrier had innovated by building two motor and sail maxi-catamarans, already in service in Cannes and Corsica. These boats respected the aforementioned criteria and immediately charmed the shareholders of the newly founded Arcachon Bassin Croisière company (ABC). From that moment, construction began on Le Côte d’Argent, the third maxi-catamaran of its generation, to be delivered in the Spring of 2015.

The delivery by sea of the catamaran, from the Mediterranean to the Atlantic, between Toulon and Arcachon and passing through the Strait of Gibraltar, was entrusted to Guillaume, who is still the captain today. During the 10-day voyage, the catamaran performed better than expected and especially under sail, with speeds peaking over 20 knots. Le Côte d’Argent was escorted by pod of dolphins through the Gulf of Gascogne and the Passages into the Bay where it was welcomed by the fleet of Bateliers.

On May 24th 2015, Sophie Davant, the godmother of le Côte d’Argent, smashed the traditional bottle of Champagne, christening the biggest hybrid catamaran in France.

The use of cookies serves to personalize your next visit to the site.
You can find out more on the cookies we use or de-activate them in the settings.

This website uses cookies so that we can provide you with the best user experience possible. Cookie information is stored in your browser and performs functions such as recognising you when you return to our website and helping our team to understand which sections of the website you find most interesting and useful.

Strictly Necessary Cookie should be enabled at all times so that we can save your preferences for cookie settings.

If you disable this cookie, we will not be able to save your preferences. This means that every time you visit this website you will need to enable or disable cookies again.

This site uses Google Analytics to collect anonymous information such as the number of visitors to the site and the most popular pages.

Please enable Strictly Necessary Cookies first so that we can save your preferences!